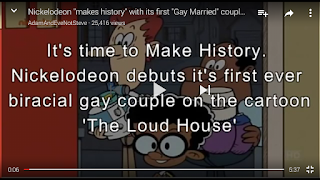 It is no longer news that Gay marriage has started to gain grounds in some countries as it is seen as a right for people to choose whom to marry irrespective of their sex. It started in America officially where the government is making it compulsory for people, hence, it has been signed into law in the United States of America.
Gayism is the sexual attraction between a man and man to come together for marriage or other sexual affairs. In other words, it simply means homosexual affairs.
In a recent releases on Nickledeon which is a popular cartoon network and has the ability to hold our kids down, gay marriage series was included in the release. This is a bid to corrupt the minds of young people, at the tender age of these children, the series is capable of instilling this belief that there is absolutely nothing wrong with Gay movement.
Therefore, parents and older siblings are to guard these young people (children) against watching this newly introduced series so as to prevent them from being corrupted with this sodomy life-style.
In the video footage below, you will see exactly what this channel is out to do on our children. Please watch and share this page, let’s preserve our land.
Special Offers

A Must Have Ten Smart-Phone Apps For Christians