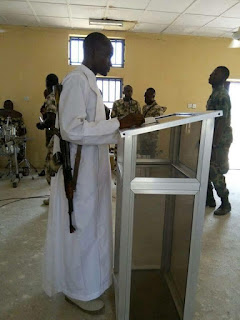 This is an amazing story that came through picture today as a soldier was spotted preaching in a military church.
Though the weapons of our warfare are not carnal, this is not so with the military.
Some Christians are already agitating that since the country is no longer peaceful, people should now own a gun and protect themselves. For instance, in Agatu, Benue state, the Fulanis invaded their land, they were defenseless. Or they could not carry guns. Maybe their Christianity belief forbid them to use guns and defend themselves.
Question of the day: Should Christians begin to carry guns in defence? How proper is this? Or it’s a cowardice to allow strangers kill you.
Special Offers

Ten Amazing and Flawless Women in The Bible (Must Read)

Download Music By Chedami – “The Way You Love Me” |@Chedami